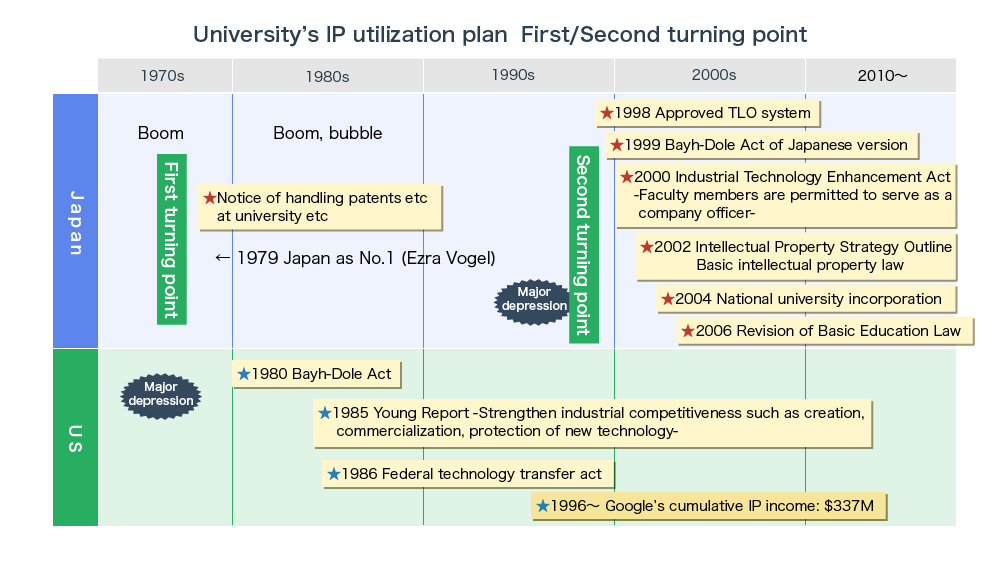 The United States is the most developed country of technology transfer. The Bayh-Dole Act was first “invented” in the world and was introduced in the United States in 1980. It was jointly proposed and legislated by Bayh and Dole, the US Senators. Prior to the introduction of this Act, inventions / patents created by research funds flowing from the federal government to the university are owned by the federal government and university has no rights, so motivation for invention creation did not work in universities, but also, the motivation to commercialize invention owned in the government was low.

Therefore, by the Bayh-Dole Act, US federal government changed the policy of giving the university the right to obtain a patent and aimed to grow motivation for creating invention, getting patent right and commercialization of it in the university . Thereafter, various opinions have been issued ( https://www.autm.net/advocacy-topics/government-issues/bayh-dole-act/), but it gained license revenue exceeding $ 2500 million nationwide in US in 2016. It was no doubt that it was a legal system that formed the foundation to get such a huge license revenue.
Meanwhile, at that time Japan was in a bubble state such as Japan No.1. There was no need to rely on university and press universities for intellectual property management or utilization. So, Japan government at that time owned one part of university’s invention , on the other hand, most part of the inventions were owned by the individual, researcher in Japanese university. After that, Japan introduced the Japanese version of the Bayh-Dole Act in 1999 as one of the departure strategies from the huge recession of the 1990s, giving the university the right to obtain a patent and making it possible to commercialize it by themselves through licensing activities. Shinichiro Koizumi, Prime Minister at that time, declared the intellectual property nation in Japan for the first time. It was about 20 years to be late for the United States. As a result, it became necessary for the university to have departments that manage intellectual property such as inventions and departments or external organization responsible for technology transfer of this IP.